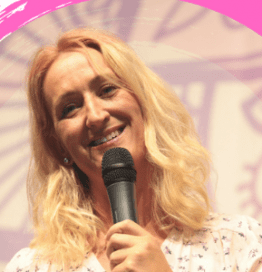 Like you, Dawn has been on a spiritual journey most of her life even if she didn’t know it most of her life, as she reflects on the deep knowledge and relationship she has now with the creator, vs the little knowledge she had previously.

When Dawn was a little girl, she began having encounters with the creator Yahuwa, well at least that’s who she thought it was anyway. According to the knowledge Dawn has now, that may not have been the case. In her teens and early twenties, she turned her spiritual life on and off, not realising that like it or not, our spiritual life is always on, we either deal with it or get dealt to. Her attitude back then was to neglect her spiritual self and focus on material things etc, which inevitably lead to her SOS prayer, in the darkest hour of her life.

She was forced to do what she should have been doing all along- acquire knowledge and focus on her spiritual life, learning not only to pray, but to pray that she would never forget this devastating lesson. The day Dawn chose to totally surrender to her creator, her mind was unlocked, and her spiritual awakening began taking place, via her teachers, Yahuwah had brought into her life literally out of nowhere. It was here she began learning about a realm that she had no idea existed. In her emotional and mental brokenness, Dawn had lost everything. She was diagnosed with an incurable disease, she lost a million-dollar empire, and her marriage broke down leaving her to raise 4 children basically on her own. At the time all she had was a prayer to her creator who revealed himself to her in such a profound way, that she could not deny, he was true and living. Dawn started soaking up spiritual principles, visualisation practices and anything else that helped her get aligned with her spiritual self. Without it the emotional self and mental self cannot function with acute awareness, and therefore will only end up being broken, again and again.

She looks forward to spending some time with you in one of her sessions and probably before, and after, getting to know you a little better also.

Experience The Yom Elomin | The Living God with Dawn Osborne Saturday 10.30am

A Journey to Emotional Healing with Dawn Osborne – Saturday 4pm