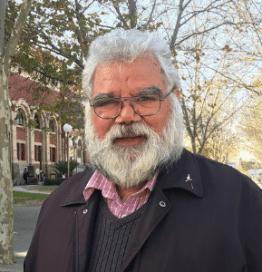 Well-known and respected Noongar Elder Dr Noel Nannup is a story teller and cultural guide, instructor and mentor. He is Heritage Consultant with Indigenous Tours WA and Elder in Residence at Edith Cowan University and the winner of the NAIDOC Perth 2017 Male Elder of the Year Award.

Noel is currently the Elder in Residence and Cultural Ambassador at Edith Cowan University and works on a variety of community and cultural projects. Noel was the winner of the ‘Recognition of Contribution to Higher Education for Aboriginal People, Western Australia’ award in 2008, a finalist in the Western Australian Citizen of the Year (Culture and Arts) Awards in 2005 and in 2003 he received an Honorary Doctorate from Murdoch University. Noel has completed two research papers, “A Survey with the Yinhawangka Community and Yinhawangka Aboriginal Corporation” in 2016-17 and “Synergies of Meaning: A documentary film series exploring the relationship and unity between traditional Indigenous Noongar knowledge and western natural and social scientific knowledge” in 2015.

Welcome to Country with Dr Noel Nannup – Friday 11am

11am - 11:20 am .Mainstage
Family Spirit
View full schedule
PREV NEXT