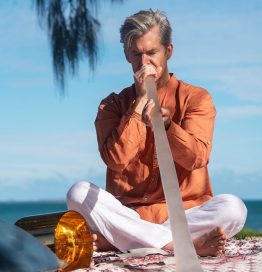 Julian has devoted his life to Sound Healing and is known for his work nationally and internationally.

Julian has learned Yidaki, (Didjeridu) directly from Aboriginal people around Australia including Arnhemland (where the Yidaki originates), and has been playing for 30 years.

He mainly uses the instrument in its traditional way for meditation, sound therapy, and ceremony.

Julian has also performed in a contemporary way in Australia, Europe, U.SA, and Canada collaborating with many world musicians and varied music genres.

Julian has been given permission and blessing to play the Didjeridu and to use it for healing here on Whadjuk Noongar land by Senior Elders and has a deep respect for their incredibly rich culture and traditions.

In 1997 he was invited by an Aboriginal artist to live and work with Aboriginal people in the Northern Territory 24 years ago. This opportunity greatly deepened his knowledge of Aboriginal Art, Stories, Culture, Healing, Ceremonial music, and Earth wisdom.

During this time he learned from several Elders who are masters of the Yidaki and Mago and through his association was culturally adopted by an Arnhemland family that has a direct lineage to the Yidaki, Mago, (Didjeridu ), which has been played for thousands of years.

For further info on Julian’s background click on the link below :http://soundalchemy.com.au/about/