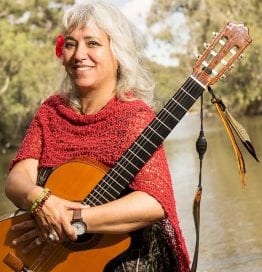 Kavisha Mazzella is  an ARIA award winning singer songwriter who does not believe in world music.It’s just music!!! Music unites us and creating imaginary titles such as world music is silly! She enjoys crossing musical boundaries and create community experiences in her shows.She first came to national attention with her appearance in the Franco Di Chiera documentary ” Joys Of The Women” in 1993. Drawing on her rich multicultural heritage she creates contemporary songs with haunting melody and lyrical depth. While her early influences come from the singer songwriter tradition of the likes of Sandy Denny,Joni Mitchell and Leonard Cohen, over time due to her passion for italian regional folksong,she has absorbed influence from the East with its modal tones and ecstatic singing styles of  Indian,Arabic, Southern Italian and Gypsy influenced song and links these with western folk music influences.Other influences that have made an impression on Kavisha’s music are her interest in meditation and mysticism through the teachings of Osho ,Sufi ,Tibetan Buddhist Masters and Advaita teachings.

Her shows have people singing along before they know it. Since 1990, She has performed extensively and also run songwriting and choral workshops at music festivals such as Maleny,Woodford Folk Festivals and International festivals such as  Edinburough Fringe,Cork Arts Festival,Australia Festival Dublin.Brunswick Music festival and Port Fairy.

Whether working solo or with others,Kavisha has carved a strong reputation as a performer, songmaker, composer ,theatre worker and teacher.playing guitar,mandolin,piano accordian , it is her hauntingly beautiful voice,capable of power and nuance, humour and spontaneity on stage that makes no two shows alike. In her music the East meets West and tracks the journeys of many migrants in the world.