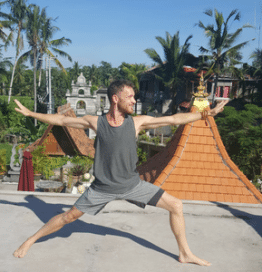 Perth Yoga For Everybody

William  has practised yoga for 8 years and obtained his 200hr YTT at the Yog Peeth ashram in the Himalayan mountains, namely Kalimpong, West Bengal and is an RYT 200 with Yoga Australia. He promotes a conscientious, breath-conscious, slow approach to hatha teachings, which resonates most with the traditional Indian Satyananda lineage of Hatha and Vinyasa.

William’s most unique classes are his Yoga Nidra, for those wanting to go deeper into the subconscious programming of the mind and unconscious connection. William was inducted into the realms of relaxation therapy by his father (also William Forde) at a very young age, who is named in some text books for pioneering work in this field in 1981. William continues to develop the regenerative and restorative aspects of meditation sessions, using the guidance of the Satyananda lineage of Yoga Nidra.

Will is most passionate about promoting yoga and bringing groups together in the outdoors and cherishes time spent in nature the most as the most enjoyable way to internalise focus and reconnect. In 2013, Will joined the community group, Perth Yoga for Everybody, under his first Mentor, Beverley Charmer, who Will succeeded as Organiser and incorporated the group in 2015.

His yoga classes promote self-love, diversity and positive affirmations to improve strength, balance and leadership. Will’s yoga classes are geared to be accessible and affordable and allow you to enjoy being yourself, whilst contemplating philosophy in action, posture variations and cues to make classes less rigid and more accessible to a wider range of bodies.

Yoga Nidra Meditation- with Will Forde Friday 11am