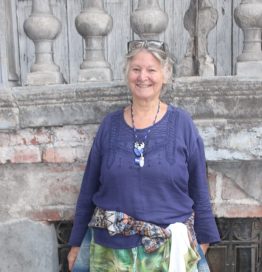 Many people talk to their plants and in 2013 after a training in Hawaii by a Kahuna the plants began speaking to me. I was made a Priestess of the Land to assist in bringing back the knowledge that we had forgotten. I was given the name Raven’s Light. Since then I have done research into the field (sometimes called Auric or Morphic) that surrounds every organism. I explored the language of plants and developed a series of workshops where people could discover for themselves how to give and receive personal messages. These conversations are made visible with heliographic dyes onto a TShirt which then becomes an energetic support garment. I have given these workshops in many different countries including Hawaii (Kauai, Big Island, Hawaii), Canada, Costa Rica, Mexico and Australia (NT,Vic,Qld,Tas, WA). Each place has contributed valuable insight into the process and made the workshop much more than I could have imagined. I have had the TShirts tested with GDV technology before and after the workshop itself and I will be very happy to share this information with you.